The GXP1628 brings an efficient call environment to any desktop. This phone delivers a an easy-to-use interface and simple design with its 132×48 backlit LCD screen, 2-line/SIP account keys and 8 dual-color LCD BLF/speed-dial keys. Also equipped with dual Gigabit ports with integrated PoE, the GXP1628 is built for a variety of deployment scenarios. Added customization and usability comes with its built in HD audio and 3 XML programmable soft keys.

The GXP1628 is a smallish light weight phone. The plastic frame is hollow, but the construction of the phone feels solid and durable. The buttons have a nice density and remain satisfactory to the touch. A removable phone stand fits into two slots on the back of the phone, and the stand can also be used as a wall mount.

The handset is not very heavy, but it does feel somewhat awkward holding it on the shoulder for extended periods of time. If you’re going to use this phone a lot, it would probably be a good idea to buy a headset (RJ9). The locking mechanism that keeps the handset in place was difficult to get out. I had to force the spring out using a screwdriver, but after that, there were no issues with this feature.

The display is somewhat tiny for a phone of this build. But with backlight capabilities and reasonable length, the display is the right size for the LED text. It serves the bare bones UI well, and it actually contributes to an appealing lo fi aura that emanates pure business rather than elaborate bells and whistles.

There are no reviews yet.

Be the first to review “Grandstream GXP1628” Cancel reply 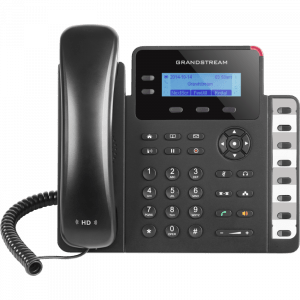